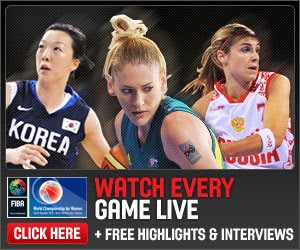 The second stage of the 2010 FIBA World Championship for Women begins on Monday and features some great match-ups right off the bat. Defending champions Australia and Olympic gold medalists USA are still undefeated and will both face teams that are desperate for wins and have very little to lose. First up will be Greece, who will take on Australia two days after narrowly defeating Senegal to advance to the second round. Then it will be Canada’s turn as they face Team USA in a battle for North American supremacy. Meanwhile Spain will take on an undersized but plucky Japan, and the other undefeated team Russia will face 2006 hosts Brazil. You can see all the Eighth-Final games, plus interviews, features and much more on FIBATV.com.

THE LEGEND OF LEGHORN'S DERBY

We posted an article of the journal "USA TODAY" where is commemorated the death of Kevin Restani (a player of Libertas Leghorn from 1982 to 1986).

MILWAUKEE (AP) — Former Bucks power forward Kevin Restani died in San Francisco after returning from Milwaukee where he had attended Game 3 between the Bucks and Atlanta Hawks on Saturday night. He was 58.
The Bucks didn't say how Restani died on Sunday night. While in Milwaukee, he had participated in the North American Association of Club Athletic Directors basketball tournament.
Restani was playing for a team representing the Olympic Club of San Francisco.
The 6-foot-9 Restani was nicknamed "Big Bird" by then Bucks play-by-play man Eddie Doucette and played in Milwaukee from 1974-79. He averaged six points and 4.6 rebounds per game with the Bucks and played eight total seasons in the NBA, making stops in Kansas City, San Antonio and Cleveland." (article from USA Today 04/26/2010)