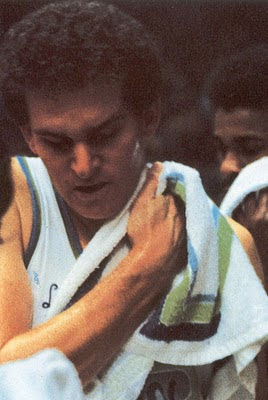 Press release posted on the Milwuakee Bucks on improvisation death of Kevin Restani.
"MILWAUKEE — Former Bucks power forward Kevin Restani died in San Francisco after returning from Milwaukee where he had attended Game 3 between the Bucks and Atlanta Hawks on Saturday night. He was 58.
The Bucks didn't say how Restani died on Sunday night. While in Milwaukee, he had participated in the North American Association of Club Athletic Directors basketball tournament.
Restani was playing for a team representing the Olympic Club of San Francisco.
The 6-foot-9 Restani was nicknamed "Big Bird" by then Bucks play-by-play man Eddie Doucette and played in Milwaukee from 1974-79. He averaged six points and 4.6 rebounds per game with the Bucks and played eight total seasons in the NBA, making stops in Kansas City, San Antonio and Cleveland."
bye bye "Big Bird" Kevin!!!
SHOWTIME@ILBASKETLIVORNESE.IT WWW.ILBASKETLIVORNESE.IT
Pubblicato da ILBASKETLIVORNESE