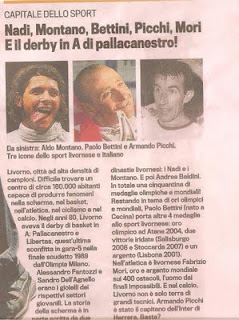 TRANSLATION OF THE ARTICLE

NADI, MONTANO, BETTINI, PICCHI, MORI AND THE LEGHORN'S DERBY IN LEGA A

Leghorn, a city with high density of samples. Difficult to find a center about 160,000 habitants capable of producing phenomeno in fincing, basketball, in athletics, cycling and soccer. In the '80s, had Leghorn in Serie A derby basketball: Libertas and Pallacanestro, the latter defeat in Game 5 in the 1989's finals from Olimpia Milan. Alessandro Fantozzi and Sandro Dell'Agnello were the jewels of their youth sectors. The history of fencing is import written by two dynasties from Leghorn: Nadi and Montano. And then Andrea Baldini. A total fifty Olympic and World medals. Staying on the them of Olympics and World gold medals, Paolo Bettini (born in Cecina near Leghorn) leads four other medals in the Leghorn's sport: Olympic gold in Athens in 2004, two world championship victories at the World Championships (Salzburg 2006 and Stuttgart 2007) and a silver medals in Lisbon 2001. Fabrizio Mori in athletics win a gold and a silver medals at the World Championships in the 400 hurdles: a man of the impossible finals. And in the soccer Leghorn is not only a land of great coaches. Armando Picchi was the captain of the great Inter of Herrera. Enough?"
Saturday, April 9, 2011 was published on the pages of "Gazzetta dello Sport" (first italian sports daily), in an article about the rivarly between two Leghorn's coaches Massimiliano Allegri (AC Milan) and Walter Mazzarri (Napoli SC) in the fight for the "Scudetto" in the italian soccer championship, a small blurb titled "Leghorn Capital of Sport" which said that as a small city like ours has been able to churm out fine specimens in a disciplines including, of course, basketball.

The journalist recalled the legendary eighties basketball Leghorn with the two teams, Libertas and Pallacanestro, players who were vying for mayor in the top division of italian basketball league.

The journalist also recalled the history of the championship finals between the Libertas Leghorn, sponsored by Enichem, and Olimpia Milan, sponsored by Philips.

The journalist also recalled the great champions of basketball that as left citizens from various unrseries, primarly Alessandro Fantozzi and Sandro Dell'Agnello.

In short, the journalist recalls how great Leghorn a time and perhaps, as the journalist was born in Leghorn, will hop one day to see Leghorn still excel in the top italian division.
Pubblicato da ILBASKETLIVORNESE