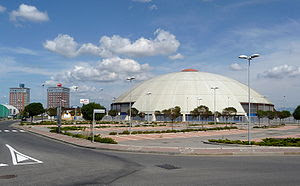 The PalaLivorno is a multipurpose facility built after more than 10 years, the initiative of City of Leghorn. Is situated in the new commercial port, in Veterans Sports street. 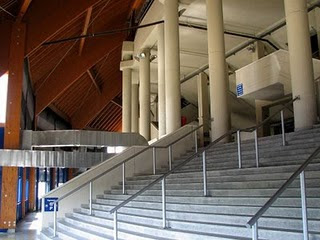 The work of this amazing plant have started back in 1988 when then there were two teams of Leghorn in "Serie A" (Libertas and Pallacanestro Leghorn) and ended only (so to speak) in the spring of 2004. Inaugurating the facility was the game between Mabo Leghorn and Skipper Bologna in March 14, 2004.
The architectural element that characterizes the sports hall is the wooden roof structure that appears to be the largest in Europe, carried out with a domed structure in three-dimensional laminated wood: 109 feet in diameter, maximum height of 33 m and a surface cover 12,200 square meters. 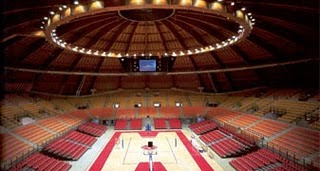 The PalaLivorno has a capacity of 8,033 seats for basketball games and can be raised to more than 9,000 spectators if the chairs are arranged in the "parterre". Arena there are eight dressing rooms for athletes and referees, the hall "Pietro Mascagni" of 320 square meters, the press room "Amedeo Modigliani" of 170 square meters, the hall "Giovanni Fattori" of 60 square meters, three rooms used office, three warehouses and internal technical and technological premises, a warehouse outside of 400 square meters, two dining options, two local police and fire service, medical center for athletes and first aid, large exhibition halls and staging. The plant was established last home games of the Leghorn's team that played in League A, Basket Leghorn. 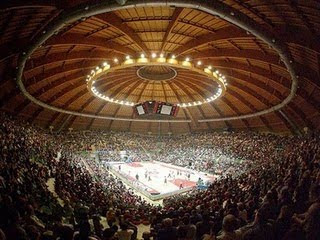 Since it was opened by The Manage Forumnet, company management has other important facilities such in Italy: the Mediolaum Forum in Milan and the PalaLottomatica in Rome.
The PalaLivorno is easily accessible since it is located just outside the "Porta a Terra" Leghorn's highway, for those coming by car, but also by train is easy to reach since a few hundred meters away is the station in Leghorn. A fabulous plant worthy of the glorious history of basketball Leghorn, Italy that all envy us but unfortunately we are still far from full as you can see in this picture.
SHOWTIME@ILBASKETLIVORNESE.IT WWW.ILBASKETLIVORNESE.IT
Pubblicato da ILBASKETLIVORNESE