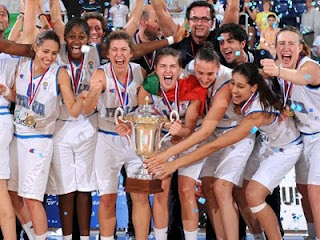 That the Leghorn's basketball is in crisis is obvious to all. The last episode we had this summer when the only top team that had remained in Leghorn, the Women Basketball Leghorn, is demoted from series A1 to series A2 has decided not to participate in that league to shared by a number even lower, the "Serie B Eccellenza" female. Fortunately, however, there is good news for the whole movement "Labronico" basketball. A female basketball player in the formation of Leghorn, Nene Dienes (the black player in this picture), won the title of European champion with the Italian under 18 by defeating Spain in the final with a score of 66-61. An episode that makes any proud fan of the sport in our city.
SHOWTIME@ILBASKETLIVORNESE.IT WWW.ILBASKETLIVORNESE.IT
Pubblicato da ILBASKETLIVORNESE